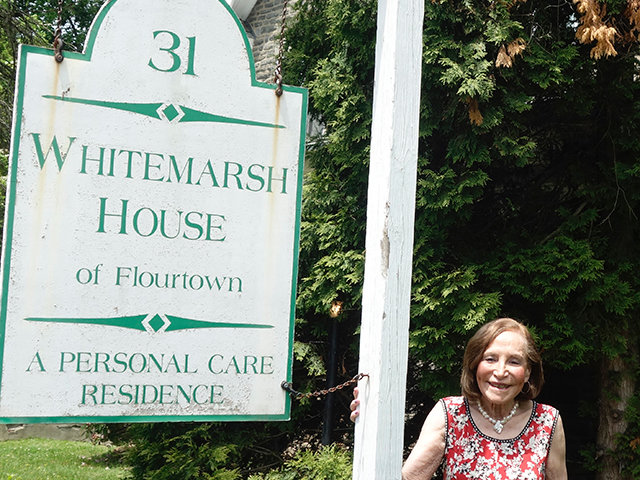 Located in a quiet neighborhood on West Mill Road in a 200-year-old Victorian home complete with a wrap around porch, residents get individual treatment programs in a residential setting.

Through her personal and professional dealings, Mazer is known as “The Stroke Lady.” Her late husband, Howard, went to work on July 18, 1989, to perform surgery but while operating, he suffered a brain aneurism. He was rushed by helicopter to Thomas Jefferson University Hospital, where Mazer picks up the story.

“In the morning he kissed me goodbye. He was 48 years old and seemed perfectly fine. At about 10 a.m. I got a call from South Jersey Regional Hospital saying that my husband had passed out during surgery. He suffered a ruptured brain aneurism, was in a coma, and blood was coming out of his head.”

Her husband was in a coma for three months and on a ventilator for eight months. He spent a year at Jefferson and then six months at Magee Rehab. During that time Toby, who has a master's degree in Public Health, turned her attention to the neurosciences.

“Because Howard also worked at Jefferson, I was able to access their medical school library. This was before the internet. I spent more than a year researching stroke and brain injuries,” said Mazer, who then parlayed her knowledge into working at the Jefferson Stroke Center as Director of Stroke Neuroscience Outreach Development. In that position she built the unit from nine beds to 30 beds, retiring in 2015 after nearly 22 years there.

Toby persisted during this time and submitted a grant to Johnson & Johnson, receiving $100,000 to establish a non-profit to change the perception of stroke throughout the Delaware Valley. It was with this grant money that the  Delaware Valley Stroke Council was formed. Toby also joined the Board of Directors of the National Stroke Foundation.

“It was my vision that things had to change, and there had to be a better way in terms of stroke treatment,” said Mazer, who was able to get all of the major teaching hospitals in Philadelphia on board with the idea of FAST education. “F” is for a face that is drooping; “A” is for someone who can’t lift an arm; “S” is for  someone struggling with speech, and “T” is for timing — to get the stroke victim to a hospital fast.”

From the teaching hospitals, Mazer then went into 35 regional hospitals in the Greater Philadelphia area, including Chestnut Hill Hospital, to explain the symptoms and critical timing necessary to treat stroke victims.

“Initially, if a patient went into Chestnut Hill Hospital he/she called in to the Jefferson Stroke Team around the clock to get a stroke professional to make a diagnosis through telemedicine. If they needed an intervention, we worked with the helicopter companies in the region to bring them to Jefferson. Telemedicine really changed the way stroke is viewed and treated all over the country.”

At the end of 2015 she decided to retire but didn’t take to the lifestyle. One morning in April of 2017, she saw a small ad in a newspaper for someone with TBI (Traumatic Brain Injury) and a neurological background, and Toby proceeded to talk her way into an interview at Whitemarsh House that afternoon.

“I met with Executive Director Lawrence Anastasi, who is a wonderful man, and the next day I was offered the job,” she said. “They knew I knew what I was doing and had connections through the Delaware Valley Stroke Council and that I knew all of the discharge planners.”

In addition to growing from a dozen to 20 residents, Whitemarsh House also rents first floor apartments at the Washington Towers apartments on Bethlehem Pike for residents who are able to live somewhat independently. In addition, residents frequent the nearby Wawa, local movies, restaurants and even Fort Washington State Park, where their yard and garden backs up to.

Before the coronavirus they were going out every Wednesday on field trips.  As for coronavirus, Mazer says they haven’t had a single case.

As for Dr. Howard Mazer, after about five years, he was able to use a computer and do the family finances again. “It wasn’t all roses, but he did have a quality of life, and that’s important. We don’t want residents to feel that life is over … I feel that my mission in life and the reason I was put on this earth is to help those people who have been neglected and need me. We are all like one big family,” said Mazer, who declined to give her age. “You can say I’m post-retirement age, and I’m going to stay with Whitemarsh House until they carry me out.”

Our own Toby Mazer, Development Director at Whitemarsh House, was recently featured on the Today in Philly Labor radio program on WWDB 860AM hosted by Joe Dougherty (PhillyLabor.com), Pat Eiding (President of the Philly AFL-CIO), and Joe Krause. Listen to Toby’s segment of the podcast below.

Eileen Bilger has helped pack meals for Chestnut Hill Meals on Wheels every Monday and Tuesday for the past year ensuring that each meal is accurately packed according to specific client choices. In other words, Eileen knows exactly who doesn’t get soup, who’s allergic to peanuts, and who gets extra veggies. And she makes sure the meals are packed to reflect those preferences. Eileen’s enthusiasm for her work is contagious – no matter how early in the morning it is, she shows up on time and ready to get packing! A quick and serious learner, she mastered the packing process from day one on the job.

A number of years ago, Eileen was involved in a car accident that left her with a brain injury. Today she is a resident of Whitemarsh House in Flourtown. Whitemarsh House is a personal care residence for people with brain injury. Bill Walter, the Clinical Director at Whitemarsh House, was the person who originally reached out to ask if Eileen (who has a background in food services) could help us. And we are so very happy that he did!

Through this volunteer work, Eileen is learning transferable job skills that will help the Office of Vocational Rehab open a case for her to go back to paid employment. Packing custom meals for Chestnut Hill Meals on Wheels clients may open the door for her to work at other food prep facilities also charged with assembling custom meals.

Those of us who spend time with Eileen know how very proud she is of her work. Her family, including her parents, brother, sister and her cat, Midnight, are also very proud of her progress. Eileen’s time with us makes a significant difference in the lives of many of our vulnerable neighbors. Eileen’s talents and humor in the kitchen continue to bring smiles to many and make the work we do even more meaningful and enjoyable. Thank you, Eileen, for bringing smiles to so many!

All of us at Whitemarsh House are proud of the amazing contribution that Eileen has made to the community at large. Congratulations Eileen!

Chestnut Hill Meals on Wheels is a nonprofit, community based service organization providing affordable quality meals to our homebound neighbors.